Exhibition visit: We Want People Who Can Draw: Instruction and Dissent in the British Art School, Manchester Metropolitan University Special Collections (until 31 July) 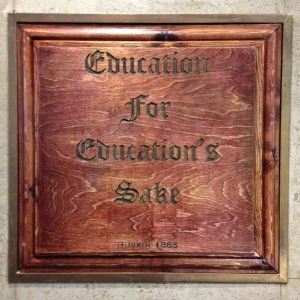 Ruskin plaque in the entrance to Manchester School of Art

Though it’s not directly related to schools, as part of the contextual reading for my PhD I have also read a lot about the history and development of art education, specifically art schools and colleges in Britain, from the municipal colleges of art that were set up in industrial towns and cities in the nineteenth century, to the changing status of provincial schools of art and art degrees following the Coldstream Report of 1960, to the student protests and occupations sparked by that at Hornsey in 1968, where students demanded more say in the direction of their education.

The current exhibition at Manchester Metropolitan University’s Special Collections brings together an impressive, stimulating and inspiring range of materials relating to the last of these aspects of the history of British art education, borrowed from individuals and institutions including the Women’s Art Library in London. They encompass manifestos, books, magazines, pamphlets and student journals, including material from Art & Language in Coventry and King Mob at Goldsmiths in London, along with exhibition publicity, films, some evocative photographs of demonstrations and occupations, and prints and posters relating to these demonstrations, and correspondence between students and university officials. Through these artefacts, the exhibition draws out links with wider and international movements for change such as the Situationist International and radical feminism. Many of the publications were amassed and distributed by Ron Hunt, the librarian at Newcastle University, who must have some tales to tell!

Many of the objects, as well as being fascinating documents of the time and a particular educational and social moment, raised important questions about the purpose and uses of art in the post-war context, a period in which the government and other authorities had started by promoting the potential and responsibility of art to take on an explicitly social role in both educating and improving the lives and leisure of the masses. Should art, and the critical and technical skills students developed at art schools, be used for the good of society, as in the street theatre workshops discussed in the exhibition, or should it be enlisted into the commercial services of advertising, against which students at Hornsey were partly protesting? One of the most intriguing items in this regard was Ken Garland’s 1964 First Things First manifesto, recently updated fifty years on, which enlisted the signatures of several designers to rail against advertising and call for design which worked for the public good. It would be interesting to know what came of the signatories, and where their future careers led them …

At a time when the value – and cost – of studying arts subjects, not just at school but at degree level, is being questioned, and when university buildings are still being occupied through student protests, it was strange not to see present-day imagery and examples in the exhibition, despite this providing the starting point for the exhibition catalogue.

The catalogue is well worth a read and is accessible as PDF at www.specialcollections.mmu.ac.uk/files/wewantpeople_guide.pdf.