Exhibition visit: Out There: Our Post-War Public Art, Somerset House 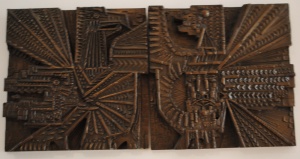 Earlier this year, Historic England announced the listing of a number of major post-war public artworks. The exhibition ‘Out There: Our Post-War Public Art’ at London’s Somerset House celebrates this recognition of an important aspect of our social, cultural and architectural history. At the same time, the show offers some necessary context for these works of art, filling in gaps and lapses in our collective memory. As we are reminded throughout the exhibition, prevailing attitudes towards twentieth century built environments have often resulted in publicly owned artworks being damaged, lost, hidden, destroyed or neglected.

The capital is a good starting point for a retrospective on public art, from the myriad artworks commissioned for the 1951 Festival of Britain to the London County Council’s post-war series of outdoor sculpture shows, where the public were asked what they were thought, given tours and offered sculpture-making demonstrations. Naturally, the post-war New Town of Harlow, with its artworks in housing estates and shopping areas, also features strongly, with an entire room dedicated to ‘sculpture town’. Another room screens a cringeworthily stilted promotional film made to attract people to the town and a new way of life.

Another section is dedicated to the commissioning and purchasing of artworks for schools, with a particular focus on those counties which had strong patronage schemes and a commitment to placing artworks in schools at a county level, and the way in which this was facilitated by the dedication of a particular percentage of school building budgets to the incorporation of art.

Other artefacts include correspondence around the commissioning process and reception of public artworks, often revealing the professional and social ambitions of those involved. These include Victor Pasmore’s comment in a 1977 letter that he conceived his Apollo Pavilion at Peterlee as ‘a sort of temple to raise the quality of a housing estate to the Gods!’. Elsewhere, the use of quotes throughout the show, from artists and architects, highlights the challenges and problems, as well as ideologies and attitudes, around public art, popular culture and the post-war project of changing the masses’ relationship with art. I particularly liked Festival of Britain Director of Architecture Hugh Casson’s comment that rather than ‘high brow’ or ‘low brow’ culture he preferred to think of ‘concertina eyebrows’, which were ‘high here, low there’, prioritising art that was ‘sincere, lively and the best of its kind’.

It was also fascinating to see models and maquettes – among the most enjoyable are miniature versions of William Mitchell’s Corn King and Queen sculptures at Wexham, and a small test piece for his Lee Valley Water Company Mural at Hatfield – as well as descriptions, illustrations and interviews about the ways in which artworks were made and the often new and innovative ways in which materials were put to use.

We are reminded that publicly visible art does not always mean publicly owned art, and that corporations and businesses were among the major commissioners in the post-war period. Most importantly, as well as showing how and where post-war public artworks were commissioned, ‘Out There’ offers some reasons why publicly accessible works of art moved away from monumental statues of grand historic figures to celebrate and depict the general public in this period. Whilst it is suggested that there may have been a number of agendas at work – for example, it is argued that the prominence of sculptures depicting mothers and children in post-war places could have been part of a wider desire to reinforce women’s traditional role as wives and mothers – the exhibition also argues that post-war public art aimed to create a sense of community and spirit in new, rebuilt or broken places, create visual interest and variety and make people think about the places they were in. The conventional narrative is that these lofty ambitions have failed or been forgotten, but the exhibition also reminds us of the places in which public art has been taken to heart, and become an integral part of our post-war places for living, working, shopping and socialising. In this regard we’re brought up-to-date by the inclusion of ongoing campaigns for these artworks to be recognised, retained and appreciated, whether they are led by heritage bodies such as Historic England and the Twentieth Century Society, artists such as Bob and Roberta Smith, or concerned and interested members of the public.

‘Out There: Our Post-War Public Art’ is at Somerset House, London until Sunday 10 April.