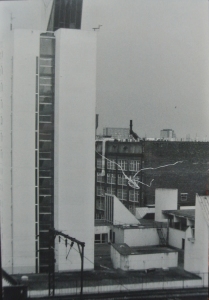 My PhD concerns not just the changing experience of post-war education, but the changing places in which it took place and the significance of educational environments, including the incorporation of examples of original and contemporary works of art and design into school buildings. This week I’ve been thinking about an educational environment that has been significant to me, the University of Manchester’s former UMIST campus in Manchester, where I lived as an undergraduate. UMIST is currently subject to a Manchester City Council consultation around a proposed Strategic Regeneration Framework, which would see a loss of the campus’ modernist heritage as well as areas of green space. Manchester Modernist Society is currently encouraging interested parties to comment on and object to the proposals that have suggested in the SRF. Here the comments I submitted:

“I would like to comment on the North Campus as a longstanding-resident and user of the city centre, including as a student, and a visitor to the city centre. As an undergraduate student at the University of Manchester (2005-2008) I spent three years living in Fairfield Hall, part of North Campus, and found it a very attractive and pleasant place to live, and also to undertake student activities. For example, I played in the University of Manchester Fellows Orchestra, which rehearsed in the Renold Building, and performed in the Sackville Building, and as a student and alumni of Manchester University I have also made use of the Joule Library, also based in Sackville Building. I found North Campus a very pleasant place to live as a student, well-connected but peaceful due to the lack of road traffic and used in the summer for outdoor activities, particularly in Vimto Gardens, a well-known landmark and meeting place. I found it to have a strong sense of place, both due to the campus architecture and sense of coherence of the campus plan and landscaping, and due to the use of public art referencing the area’s history and the way in which the university had shaped it. Its identity is both strong and distinct from other areas in Manchester City Centre. I consider those formative years spent living on North Campus to have piqued an interest in twentieth century art and design that stay with me to this today – I am now undertaking a PhD on the subject at the University of Central Lancashire (co-supervised by Dr Hannah Neate of Manchester Metropolitan University), and write regularly on public art, planning, landscaping, education and design, including for the modernist magazine.

Immediately following graduation I spent five years living in M1 (in the vicinity of Piccadilly Station), followed by eighteen months living in Castlefield, and continued to visit UMIST, particularly in the summer, as a quiet and green place to sit, read and have picnics. I also used UMIST regularly (and continue to do so) as a traffic-free pedestrian and cyclist route from the Piccadilly area to Oxford Road. I have also visited on a number of occasions as part of Manchester Modernist Society tours and events, and learnt about the significance of the architecture and the campus plan; I myself used to take visitors to show them Hans Tisdall’s mosaics in the Faraday Building, and they have been featured in my magazine the Shrieking Violet: https://issuu.com/natalieroseviolet/docs/the_shrieking_violet_issue_3

I no longer live in the city centre, but I work there and continue to visit UMIST, both as a green space and as a traffic-free pedestrian and cycle route heading out of the city centre for South Manchester.

I am concerned that the North Campus SRF focuses on the heritage of Sackville Building (and rightly so) but fails to take into account the architectural significance of a number of the mid-twentieth century ‘modernist’ buildings, which have both architectural significance (particularly the Renold Building) and as a cluster of buildings developed at a time of scientific, educational and technological expansion, which represents a significant shift towards modernity for Manchester’s cityscape. This demonstration of modernity and innovation is reinforced by North Campus’s proximity to the Mancunian Way, itself an innovative and high-profile example of Manchester’s post-war planning.

I am concerned about the removal of Hans Tisdall’s the Elements mosaics and I am particularly concerned that the mural in the Renold Building is not highlighted as a heritage asset, despite the fact that it is by one of Britain’s most important mid-twentieth century abstract artists, Victor Pasmore, who also contributed significantly to the development of British post-war art education through the Basic Design movement. Pasmore’s Renold Building mural is a rare example of a publicly accessible and viewable work by an artist by that stature in Manchester – indeed, his most celebrated work, the Apollo Pavilion in Peterlee, County Durham, has been the subject of extensive restoration and renewed interest in recent years. The mural is particularly significant, I feel, due to the post-war historical context in which it was commissioned, when educational and state bodies (including a number of universities) assumed responsibilities for patronage of contemporary art.

At a time when English Heritage is promoting the listing and retaining of post-war public artworks, I am also concerned that Anthony Hollaway’s Hollaway Wall is underlooked in the report, and that there are suggestions to shorten or move this Grade II listed structure, which acts as both an artwork and as a sound buffer. I consider the Hollaway Wall to be a rare and significant example of an architectural sculpture in Manchester, by an artist who built up a considerable reputation for his work across the country in the post-war period, particularly as an in-house design consultant for the London County Council. Along with William Mitchell, he was innovative in his experimentation and exploration of the use of materials for artworks in public places, including concrete, and was versatile in his media (for example, he designed a modern stained glass window for Manchester Cathedral). Hollaway’s work in Manchester, including the Hollaway Wall, commissioned with the local architects Fairhurst and Sons, is also a good example of a post-war emphasis on collaboration between architects, artists, designers and builders.

Finally, as alluded to previously, as a longstanding user of the space, I am concerned about any loss of green space in the North Campus area, including a reduction of space in Vimto Gardens, particularly in a city where parks and green spaces are in short supply. Although Sackville Gardens is nearby, it attracts a considerably different demographic and has a different atmosphere, due to its proximity to the clubbing area of Canal Street, where outdoor drinking is much more established. I consider the area’s landscaping, including mature cherry trees, to be one of the most successful aspects of the campus, which gives it a strong sense of place.

I would welcome a reuse of existing buildings, including railway arches and Sackville Building, and feel that an increase in the number of people living, working in and visiting the area would justify the retaining of significant areas of green space and make it an attractive place in which to live, work and visit.

I am also extremely concerned about any proposal to add roads through North Campus, and to increase the flow of vehicle through it, as I have appreciated and regularly used it as a quiet, traffic-free route as a pedestrian and cyclist. I am concerned that a road would both damage the atmosphere and landscaping of the campus, as well as leading to increased traffic, noise and pollution. The area is already bounded by several major roads, from the A6 to the Mancunian Way.”