← Consultations on the future of art loan services in Derbyshire and Hertfordshire
‘The Lost Art of Churches’: Radio 4 Extra programme on modernist and modern art in churches → 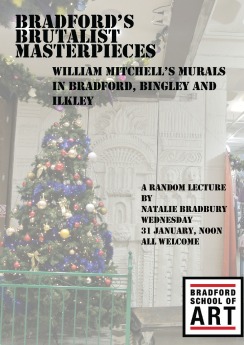 I’ll be returning to Bradford School of Art on Wednesday 31 January to do another lecture in its Random Lecture series. The lectures take place at 12 noon; all welcome.

Born in 1925, the artist and industrial designer William Mitchell’s work can be seen in towns and cities around the world. However, it does not hang on the wall of art galleries, but is an integral part of the buildings in which it is found. These range from everyday places such as schools, libraries, pubs, subway underpasses and the foyers of post-war towerblocks, to flagship buildings like Harrods and the Metropolitan Cathedral of Christ the King in Liverpool.

The talk will give an overview of Mitchell’s work and career, focusing in particular on three artworks by William Mitchell in the Bradford area which demonstrate his post-war work in municipal and civic contexts as well as for corporate and commercial clients. Using innovative techniques and working in media such as moulded concrete and fibreglass, all three murals are distinctively of Mitchell’s style, yet take different stylistic approaches, from abstracted pattern-making to incorporating elements of the history of the area in which they are located.

It will explore a series of concrete murals in Bradford’s Kirkgate market, built in 1973 to replace a previous Victorian market, by Mitchell or an assistant; thirteen fibreglass panels, commissioned for the former Bradford and Bingley Building Society headquarters in Bingley in the early 1970s and depicting the architectural and engineering landmarks of the area; and a large mural for the Ilkley Wool Secretariat, completed in 1968, which explores the history of wool manufacture locally.

These case studies will be used to highlight wider changes in attitudes towards post-war architecture, and the ways in which these types of artworks are regarded: whilst a new home has been sought in recent years for the Bingley murals, which were removed as the highly unpopular building in which they were situated was demolished, Mitchell’s Ilkley relief has been widely feted and was celebrated with Grade II listing by Historic England in 2015.