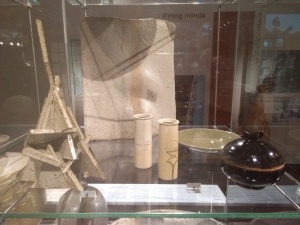 This week I visited Bristol to catch ‘Radical Clay’, a small but thoughtfully done exhibition showcasing some of the ceramic pieces which were acquired as educational resources for the city’s schools. The exhibition posed the question: ‘Is investing in children’s creativity by showing them the very best still something to aspire to?’

Now mostly accessioned into the Bristol Art Gallery collection, more than 400 examples of studio pottery were purchased to be lent to schools across Bristol in the post-war period. Pictures for Schools was one of the places from which Bristol, along with a small number of other local education authorities and museum services, bought pottery, as well as purchasing work directly from galleries such as Primavera in London.

Bristol developed an impressive collection containing work by some of the leading potters of the time, including Bernard and Janet Leach, Hans Coper, Lucy Rie, Helen Pincombe and Peter O’Malley, as well as potters with more local connections, including to the local art schools. Pieces ranged from abstract sculptural objects, such as a stoneware vase by Hans Coper (1970), to more functional items such as bowls, teapots, cups and vases, to crafted object such as an earthenware dove by Ewart Uncles (1969). 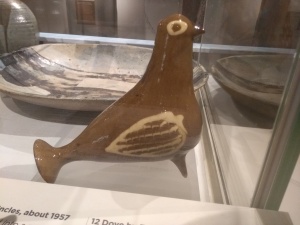 Whilst some were chosen to appeal to children, incorporating imagery such as fish, cockerels and birds, the exhibition usefully drew out some of the other ways in which the pieces might have been used in schools, such as demonstrating particular techniques, ways of forming shapes, and of creating decorative patterns. 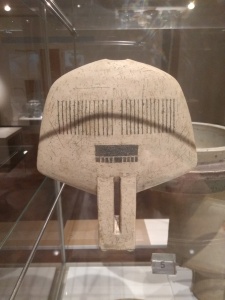 The pieces were lent to schools until 1990 when the service, consisting of increasingly valuable and hard-to-insure artworks, closed. However, ‘Radical Clay’ gave some idea of how the artworks might have been used in schools, reproducing photographs of ceramic pieces displayed in school alongside students’ own work, alongside testimonies from those who had studied and taught in Bristol’s post-war schools about the influence that creative education had had on their future careers.

As well as placing the collection within the post-war educational context of Britain’s post-war schools, as a tool for fostering first-hand learning and the development of creativity, the exhibition explored wider trends in studio pottery at that time, partly through the use of archival documentary films demonstrating particular schools, studios/production contexts and techniques. The exhibition drew connections not just to a fashion for Mediterranean dining, and to artists’ and craftspeople’s ambitions that their work should be affordable and enjoyed as part of everyday life, but to countercultural movements which reacted against mass culture and consumerism and placed renewed value on the handmade at that time.