For some time, I followed with interest on Twitter the development of New Town Utopia, a new documentary about the new town of Basildon in Essex.

Although I’ve visited Harlow, another Essex new town, I’m not familiar with Basildon. I found the documentary, which I watched this week, to provide a remarkably even-handed portrayal of the town. Rather than merely dwelling on or aestheticising the town’s architecture, or condemning its social failures, it matched the aspirations for the town’s development up to the experiences of those who had moved there from the East End of London, and those who were born and grew up there.

The words of Lewis Silkin, the then Minister of Town and Country Planning, run through the film, setting out the context from which new towns such as Basildon emerged in the post-war period. Silkin explains that they aimed not just to alleviate the ‘grossly congested and overcrowded’ living conditions of the inner-city, but to ‘produce a new type of citizen, a healthy, self-respecting, dignified type of person, with a healthy sense of beauty, culture and civic pride’. By being well-designed and filled with artworks and cultural centres, he hoped that new towns would play their part in fostering an ‘appreciation of beauty’. The film questioned the extent to which new towns such as Basildon lived up to this. Whilst their new residents were delighted with new homes with conveniences such as indoor bathrooms, the improvement in living conditions did not always correspond to the changes in citizens which politicians and planners such as Silkin envisaged; Basildon, like the areas of East London from which many of its residents came, retained a reputation for toughness, and its interviewees categorised the town’s pubs according to the violence of the welcome one was likely to receive.

Whilst the shopping areas and public spaces of Basildon, like other post-war new towns, were populated with artworks such as large-scale sculptures and mosaics, what was most striking in New Town Utopia was the culture that emerged outside of the mainstream culture of the town, and these municipal gestures (or perhaps as an escape from it) – from the electronic bands of the 1980s (most famously Depeche Mode and Alison Moyet) to later generations of rock and indie promoters, to poets, painters, pupeteers and street artists.

To find out more about New Town Utopia visit www.newtownutopia.com. 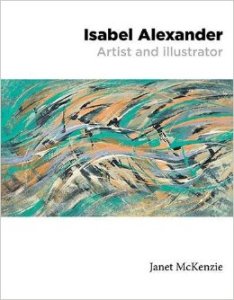 The story of Isabel Alexander is by no means an uncommon one. Born into a middle-class, educated family in Birmingham in 1910, as a daughter she was denied her first choice of an education, to train at the Slade. Instead, she attended Birmingham School of Art in the 1920s before finding employment in schools and at Saffron Walden teacher training college in order to pursue her training and practice as an artist. This determination to work and exhibit enabled self-funded studies at the Slade, and a fifty-year career as an artist, pursued at the same time as being a single mother.

After the Slade Alexander went on to work in the burgeoning British documentary film movement of the 1930s and as a commercial illustrator. She designed book tokens vividly illustrating rural life and occupations in East Anglia, Kent and the Cotswolds (1953) and undertook botanical illustrations for the educational Puffin picture book series, such as the close-up study ‘Penicillum’ (1948) from the unpublished follow-up to the Story of Plants, where aspects of nature are observed in a way that exaggerates and exacerbates their qualities and form.

Alexander succeeds at documentary and narrative, as in her 1944 portraits of disabled miners. She also aptly captures place: highlights include ‘Pinnacle, Thaxted Church’, a 1951 linoprint of a church spire in which natural and architectural details are intertwined and ‘Bardfield Landscape III’, a subtly abstract, yellow-hued watercolour of 1950. Both are inspired by the Essex landscape; she settled in the picturesque and historic village of Thaxted, on the border with Suffolk, before relocating to North Yorkshire for the final years of her life.

In the 1960s Alexander exhibited drawings and paintings at the Pictures for Schools exhibitions, selling work to schools including Godolphin and Latymer School in London and Cambridgeshire and Nottinghamshire education committees. She maintained a commitment not just to exhibiting herself, but to keeping up with visits to exhibitions and maintaining an ongoing interest in contemporary and historical art movements.

A new exhibition of Alexander’s work in Harrogate, bringing together work from private collections and accompanied by a book by Janet McKenzie, aims to highlight her legacy and expose the barriers she faced as a woman seeking a career as an artist. It also traces Alexander’s journey from realism to a growing focus on abstraction and experimentation with media and form.

However, the work in the exhibition suggests Alexander’s transition between realism and abstraction was not clear-cut, and a sense of abstraction and experimentation underlies much of her apparently realistic and naturalistic work. For example, the use of an unexpectedly lurid crayon introduces an ominous element into the otherwise murkily coloured landscape of ‘Condemned Houses, Blaencwm’ (1943), as does the skewed perspective of ‘Miners’ Houses, Trealaw’ (1944).

Displayed side by side at the Mercer Art Gallery, the watercolours ‘Moorland Larches, Yorkshire’ (1983) and ‘Winter Trees I’ (1971) hint at abstraction in their use of starkly outlined shape and colour, at the same time as conveying the particulars of landscape and season in a way that is sensory and atmospheric if not quite realistic and naturalistic.

Also not quite natural, but based in observable phenomena such as the flickering shapes and suggestive shadows of twilight and the transition to darkness, is the 1958 study ‘Moonlight’.

Other highlights include her pencil studies of weather phenomena and later, more large-scale and obviously abstract work in which experiences, natural phenomena and sensations elide, as in ‘Weeds and Water’ (1984) and ‘Gannet’ (1985) in which oils on newspaper explore the bird’s movement at the same time as suggesting watery flows.

Whilst much of her work documents places, landscapes and experiences close and familiar to her, Alexander maintained a commitment to travel and observation of new places, from a series inspired by the natural and manmade landscapes of the Isle of Aran to painting trips to France and Spain. Far from following the well-trodden genre of straightforward pastoralism, beneath Alexander’s work lies a tension between nature and artifice, implying a subtle critique of ways of working, living and using the landscape that that are alienating, exploitative or unnatural.

Isabel Alexander: Artist and Illustrator is at the Mercer Art Gallery, Harrogate until 4 June.

A large number of images of Isabel Alexander’s works have been added to the Bridgeman Art Library and can be explored alongside the exhibition.

I enjoyed the new film by Manchester-based film-maker Huw Wahl, who directed the Herbert Read documentary To Hell With Culture a couple of years ago. Huw’s new documentary focuses on Action Space, an ‘instant performance space’ developed in the 1960s by his father, Ken Turner. The Action Space collective created inflatable, movable, interactive sculptures which could be put ‘up and down in a flash’, taking art onto the streets and providing an immersive environment and experience for children and adults that incorporated music and performance. Almost fifty years on, the experimental spirit and ethos of Action Space still shines through, with Turner still committed to the transformative potential of art and its ability to affect social change.

For more information and dates of screenings, visit www.hctwahl.com/as/index.html.