Football Is Art at the National Football Museum 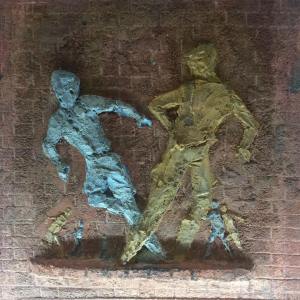 I recently went to the launch of a new exhibition at the National Football Museum in Manchester showcasing the museum’s art collection, which has been developed with funding from the National Lottery Heritage Fund.

One of the works which has been acquired is a maquette for Peter Peri’s ‘Boys Playing Football’ (I went to see the original on the wall of an estate in Lambeth back in 2017).

Peri was one of several artists who exhibited at Pictures for Schools whose work has been acquired by the museum; football, particularly local and amateur matches, was one of the aspects of everyday life captured in the pictures shown at Pictures for Schools and bought by local education authorities for school loan collections (see Carel Weight’s lively ‘Village Cup Tie’, purchased by the London County Council, and apparently later sold to the football museum, although not on display in this exhibition and Fred Uhlman’s atmospheric painting of a game on a winter evening, recently sold at auction as part of the disposal of Hertfordshire County Council’s art collection). Like many of the artists at Pictures for Schools, as a member of the Artists’ International Association he was interested in depicting and reflecting relatable aspects of people’s lives, and presenting his art in places that was familiar and accessible to them.

The exhibition encompassed a wide variety of styles and genres, from Lowry’s iconic images of northern life, to delicate illustration by Paul Nash, to contemporary British artists such as Rose Wylie and digital artworks, to fashion and textiles, to vintage posters and advertising, to portraits of footballers and artworks by famous footballers such as George Best, and even a sculpture by Piccasso.

Far from the glitz of today’s game, with its superstar footballers on multi-million pound salaries, many of the works I liked best depicted the quieter, more personal aspect of the game and its individual and collective meanings to people as part of their sense of identity, leisure, routine, community and belonging: crowds huddled loyally in the cold of a snowy day, as in Alistair Grant’s lithograph ‘Snow at Stamford Bridge’, or behind the scenes of the game as in the Mass-Observation documentary photographer Humphrey Spender’s 1930s images of changing rooms, which suggested some of the tension and anticipation of the game.

Mid-twentieth century British art was particularly well-represented in the exhibition. I was interested to find out that several of the works had been exhibited in the Football and the Fine Arts exhibition, held in 1953, and organised by the Arts Council of Great Britain and the Football Association in order to mark the latter’s 90th anniversary. One of the highlights was the Great Bardfield artist Michael Rothenstein’s prize-winning etching and aquatint ‘Moment of Victory’, an abstract set of shapes which appeared to represent little in a literal sense, but suggested movement and celebration. Another highlight was the robotic stacked shapes of surrealist painter Ithell Colquhoun’s colourful oil painting ‘The Game of the Year’, dating from the same year as the Football and the Fine Arts exhibition.

Football Is Art is at the National Football Museum until Sunday 27 October: www.nationalfootballmuseum.com/whatson/football-is-art/

I recently visited Tullie House to see a small exhibition of work from a collection acquired for the city of Carlisle through the Royal Academician Carel Weight, as part of nationwide events commemorating 250 years of the Royal Academy. Weight was one of the artists who was heavily involved in Pictures for Schools, and sold work through the scheme. As well as showing Weight’s own paintings, the exhibition showed work by members of Weight’s circle, including peers and students, such as Peter Blake, acquired for Tullie House. I reviewed the exhibition for Corridor8: read online here.

I recently listened to this interesting Radio 3 programme about the life, art and friendships of Eric Ravilious, presented by Alexandra Harris, author of Romantic Moderns. It was interesting to hear more about Great Bardfield artists and their life in Essex, as several of this group regularly contributed work to and sold work through Pictures for Schools (Ravilious’s wife, Tirzah Garwood, was one of the early best-sellers at Pictures for Schools, and her realist, detailed collages of village and rural life were consistently popular with child visitors to the exhibitions; other regular contributors from this group included Ravilious’ lover Helen Binyon, Bernard Cheese and Sheila Robinson, George Chapman, Michael Rothenstein and, most notably, Edward Bawden, who consistently sold well through the entire lifespan of the Pictures for Schools exhibitions).

The programme is still available to listen to on the BBC iPlayer here.

A few weeks ago I was in Leeds for the day and visited the Stanley and Audrey Burton Gallery at the University of Leeds, where I saw some Edward Bawden linocuts in ‘real life’ for the first time in a display drawn from the gallery’s permanent collection. I turned the corner to find them unexpectedly, and was taken aback by their bold size and scale, having assumed them to be small works on paper and not large-scale. I have a strong suspicion the two works, ‘Brighton Pier‘ and ‘Lindsell Church‘, were purchased by the West Riding School Museum Service from Pictures for Schools in the late-1950s, as the West Riding was a regular purchaser from Pictures for Schools and the accompanying labels said the works (along with some others in the gallery) were transferred from the Yorkshire Education Resource Service in 2002.

I was also recently recommended a really lovely Radio 4 programme about Brenda Rawnsley and the School Prints, a short-lived 1940s attempt to create and sell lithographs to schools by contemporary artists, chosen by a committee of experts which included people who went on to be involved in Pictures for Schools including Herbert Read and Nan Youngman. Like Pictures for Schools (and Nan Youngman), the School Prints was driven by a single-minded , determined woman, and the programme effectively told both her story and the story of the artworks through interviews with figures including her son (who recalled using unsold prints as wrapping paper at Christmas time!). Although there are key differences, such as Pictures for Schools’ emphasis on originals as opposed to reproductions, the programme covered a number of themes and issues I have been considering in relation to Pictures for Schools. These included the role of art in the classroom as a way of encouraging discussion and the skills of looking, and the presentation of a particularly positive, unchallenging version of Englishness, along with the choice of artists and subject matter for schools – subjects depicted in the School Prints, such as ploughing fields, fishermen, fairgrounds, markets and a puppet-show, wouldn’t have been out of place at Pictures for Schools (indeed, several of the artists who created work for the School Prints later contributed and sold work through Pictures for Schools, including Barbara Jones, Kenneth Rowntree, Michael Rothenstein, LS Lowry and Julian Trevelyan).